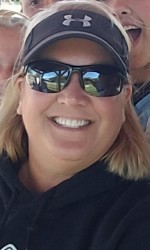 Coach Trish is a member of the USA/ASA NJ Hall of Fame and the University of South Carolina Athletics Hall of Fame. As a player, she played on 5 USA National teams including the 1993 International Cup, Haarlem, Holland;1993 – International Tournament, Oklahoma City, Oklahoma; 1994-International Tournament, Sydney, Australia; 1994-Pan Americanos De Softball Cup, Guatemala City, Guatemala; and the 1995-International Tournament, Columbus, Georgia. She was a two-time Olympic Festival participant in St. Louis, Missouri and Colorado Springs, Colorado. Trish continued to play with Major ASA Softball from 1985-1995 where she won a Women’s Major National Championship with the Raybestos Brakettes. As a collegiate player at the University of South Carolina Trish was a three-time NCAA All American.  She set and held Division I softball records and she still holds the Division I record, which has been standing for 18 years, for most Triples in a career with 51 1998-1991. Coach Trish has been selected as the head coach of the NJ Ruthless team that will compete against the USA Olympic Team in the “Stand Beside Her” Tour as it prepares to compete for gold in the 2021 Olympics.