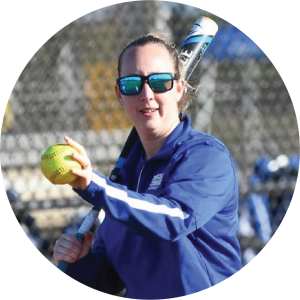 Nicole Degenhardt is the head softball coach for the Georgian Court University Lions. The 2019 squad compiled an overall record of 46-11, adding 16 wins to the program’s win total from 2018. The team went on a 17 game winning streak and was ranked throughout the season, with the highest being #18 in the country. The team advanced to its first CACC final in five years and reached the first round of NCAA Division II East Regional Tournament. In 2019, Coach Degenhardt earned her second CACC Coach of the Year honors. Compiling a roster that consisted of six All-CACC players in 2019, including the 2018 Player of the Year (Samantha Reilly) and Rookie of the Year (Caitlin Hughes), and 2019 All-Region first baseman (Marissa Trezza),  GCU topped the conference with 19 triples, 64 home runs and 375 runs scored while batting a hearty .309 as a collective unit.

Nicole, a former three-sport athlete at then-Felician College, earned All-CACC honors in softball and volleyball before graduating in 2011 with a degree in Mathematics Education/Special Education. She earned induction into the school’s Athletic Hall-of-Fame in 2017. Upon graduation, the Secaucus, New Jersey native taught high school and middle school mathematics in Wood-Ridge, New Jersey before accepting the position of  Associate Athletic Director/Recruiting Coordinator at NCAA Division III College of Saint Elizabeth. Degenhardt led the College of Saint Elizabeth softball team from 2012-15. The former North Eastern Athletic Conference (NEAC) Coach of the Year also served as the floor general of the Saint Elizabeth women’s basketball team (2011-15).